Now is the last mem in verse six the 24th mem of the bible. The nine mems in verse six tie up something for the last one, the 24th: the sum of the first 24 triangular numbers is namely 2600. Realize also that the mem sophit,

, is the 24th letter in the alphabet of 27 letters and probably one of the reasons for this special construction here.

Maybe this is useless information for the reader, but it are anchors with which the letters of the bible are tied up in the Number Universe.
This 24th mem is letter 241 of the bible. This is a mirrored digit anagram of 142, the fifth divider of 284. An other phenomenon related to the amicable numbers we can find with letter 888, the CV of

(Mat.27:33). Jesus becomes crucified at the end of the fourth world day, the fourth millennium (see the timeline). Here comes the work in GODS NAME till completion. This becomes expressed by the square of the letters of the Gods name Yahweh:

, like it is used in Mat.6:24. However the most common used writing form is 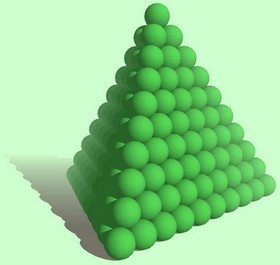 Possibly this is accentuated because the triangle of four is ten: 1+2+3+4=10=

. 4xT10=4x55=220. For this mathematical reason letter 220 is a mem. Here an image to visualize these numbers. I think that this will help to understand these numbers better. 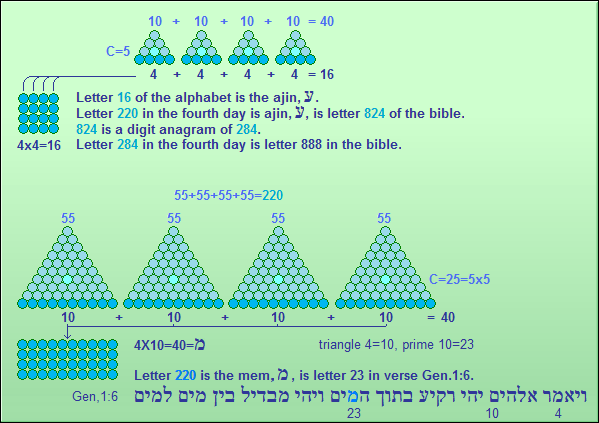 Here I will  go deeper into the fact that one letter can contain information or a code. Because the letters have a place in the bible text we can collect all kind of information about that letter:.... which letter is it, how many of this letter can we count from the beginning of the bible, a creation day or a verse etc. I have given already more examples on this site, but I want to give one more. And what letter can I use better for this example than letter 112, for this is the CV of  Yahweh Elohim,

. This is the eleventh mem of the bible and at the same time the last letter of the fourth time that Elohim occurs in the bible text (Gen.1:4 word 2). In the table below I give the order number, the letter place and the form (

The code of letter 112 has also a relation with the amicable number 220. We can make this visible by filling in the letter place of the mem out of the alphabet of 27 letters. The mem normal,

An other interesting phenomenon we can find when we extract the root out of this pair of amicable numbers 220 and 284; the sum of those numbers has a very special outcome. We ignore here the decimal point and use only the first four digits:

The question is of cause if this is by chance or meant to be so. Personally I do think the last, for with word 220 and 284 the Day of God, Jom Elohim,

, is coded. We know that Jesus plays an important roll in that day. How the bible writer this could code is a riddle to me. The writer must have been familiar with the whole concept of the bible.