Also in this way the 26 and the 86 of Yahweh and Elohim are connected by the 5th, 6th 7th and 8th aleph in Gods Number Universe and the bible text.

I showed before that the digits of 78 contain the factors of 56, for 7x8=56. This information can also be found in the letter position of the 7th and the 8th aleph. The information is very simple, but doesn't work here with multiplication. From the start of the bible the 7th and the 8th aleph are the letters 31 and 62, sum 93. However from the start of the second verse these are the letters 3 and letter 34, sum 37. The difference between these two is 56:

Now I will look to the individual digits of the word values of Gen.1:1:

The number values of the seven words contain 20 digits. We can write these values as one string:

When Jesus does his work in the world, he becomes anointed during his life time, than he really becomes Christ (=anointed). In Gen.1:1 we can express this work by placing the digits of the word values of Gen.1:1 in ascending order. This arrangement symbolizes the activity with which Christ brings order in Creation by his acting. So 913 becomes 139, 203 becomes 023 and so on:

In this order these letters have no meaning, but when we place them in the order (7-8)(5-6) or 78-56, than we find the word 'birith' which means covenant. Pay attention, the writing direction in Hebrew is from right to left: 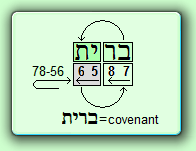 Is it real to interpret it like this? To answer this question we search Heb.7:22:

Jesus has become Surety of the covenant between God and man. It is Jesus who becomes placed at the head of that covenant. This becomes expressed by the first four letters of Gen.1:1: beRosh, at the head:

Gods Plans are already implemented in the very first verse of the bible and can made visible by means of properties of Gods Number Universe. Jesus Christ becomes not only placed at the head of the covenant, but also at the head of the whole Creation. If we express the first four numbers as an unit we find: 1234. Now is the 1234th composite number 1467, and the sum of these two numbers is: 1234+1467=2701, equal to the CV of Gen.1:1, the verse that expresses the Creation. The string of these two composites is not a complete ascending string: 1234-(14)67. Where we would expect to find a 5 we find 1-4. So there is a change in the second composite. Where we used the string 1234 to locate the letters for the word beRosh, we now use the string 1467 to find the words 1, 4, 6 and 7:

The sum of these four words is 2017, which is a digit anagram of 2701. This number is the highest prime that can be formed as a combination of word values of Gen.1:1. Primes express the 'truth'. So 2017 expresses the highest truth in Creation. Composite 2017 happens to be 2368. This tells us that Jesus Christ is standing at the head of Creation. This is part of Gods Plan or intention. This intention of Yahweh we can express as the triangle of 26: T26=351.

This phenomenon is also already described by Ian Mallett.

Here I want to look at all possible divisors of 2368. In total there are 13 divisors, the number 2368 itself excluded:

The number 149 is the CV of the phrase 'I will save you' like we find this word in Psalm 50:15: אחלצך. In chapter 50 of the Psalms this is the 112th word, which is an expression of Yahweh Elohim.

With the 5-6-7-8 phenomenon I also looked at the alphabet. On these positions we find the hee, the vav, the zajin and the chet. The number value 'full' of these four letters seems to have a mathematical relation with the singular form of the letters:

The sum of the number value of these four letters is of course 26. The sum of the gematria 'full' is 503. This is the 97th prime, and this prime is on its turn the 26th prime (see prime table):

But take it for what it is worth, for there are other fillings possible. See this link. The software that I use (Keys to the Bible) applies the the values like they are shown in the table above. And by the way: 503 is also the number value of the first four letters of the bible, beRosh, at the head: