, Jesus, the value of the Greek

, is the full grown man. This can be expressed by mean of gematria milliui (full): 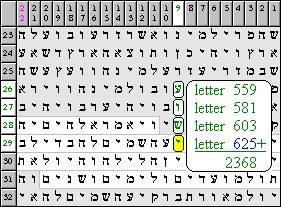 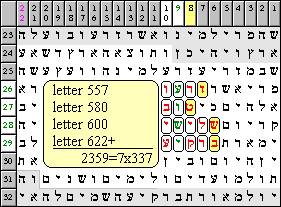 Proceeding we look for the words in which we find the letters of the code:

= in the firmament is the third his good seed

This is a statement we have to remember. In biblical sense the ‘seed’ is the son. The sons of Adam are: 1.Kaïn, 2.Abel and 3.Seth. So the third son is Seth. By way of him the line of generations leads to Jesus Christ according to the bible story. By way of him the ‘light’ appears into the world. (John 8:12 …“I am the light of the world”….) Now is the appearance of the light described in Gen.1:3. With the last two words of Gen.1:3 the light really appears: ‘and there was light’-

. If we look to the letter places of these two words and count them together than we find:

Letter places: ‘and there was light’,

The name Seth in Hebrew is:

=400+300=700. So hides the third son Seth the coming of the light in his name. The meaning of the name is ‘substituted’ or ‘inter changed’. He substitutes Abel who is killed by Kain. The name Abel is in Hebrew:

But let's go on with the code. The third letter of the code is located in the word ‘good’, tov,

, appears to be word 153. So it is the third time of the word ‘good’ in the bible text, placed on the triangle of itself (T17=153), and is crossing the third letter of the Jesus code. This third letter is the vav, the six. The sixth prime is 11, together: 6+11=17, the number value of the word tov. In the code matrix the horizontal coordinates are: 10+9+8=27 (3x3x3) and the vertical coordinate is also 27. (Note: composite 17=27) This part of the code seems to want to emphasize itself with the number three. But also the 17 seems to participate. The four words in which we find the Jesus code have together 17 letters. With gematria katan is the number value of Jesus:

The sum of those four Primes is:

Different formulated: (3+7)x37. The number value of the word

But never again prophesy at Beth-El; for it is the king's sanctuary, and the royal house.

used. Because the 3 and the 7 always go brotherly together, I have looked to the first three ‘and God said’, and counted the begin letters. That are the letters 81, 198 and 346, sum 625. This number equals the begin letter of the Jesus code with ELS -22. Of course it can be a coincident but I wanted to show it anyway.

, the earth, on letter 25 starts. The ‘truth’ of these seven letter places can be expressed by the primes of those places:

, the starting letter of the Jesus code in the matrix of 22. In this way hides ‘and* the earth’ the coordinates and the letter place of the beginning of the code. Also seems the Star of David with 337+6 units of ‘and God said’,

, to hide all the numbers that are important for this code. We have now three ‘witnesses’ namely the earth, the speaking of God and the Prime table.

, is 888 which is 3x296. This trinity expresses the relationship of Jesus and the earth. In chapter 18 you can find an analysis how this Jesus-code is connected with the 3rd perfect number 496 and the Star of David with 661 units that can be formed with this number.

The reason that this Jesus-code has ELS -22 is hidden in the alphabet. In the alphabet we find the building blocks of the Word. In chapter 1 and 2 I've given an explanation about the construction of the alphabet. The 4 and the 5 play a roll in reducing the number of letters of the alphabet from 27 till 22.  Underneath a survey.

The 22nd letter of the alphabet, the tav, has the meaning of sign or cross. From the cross, from Jesus, comes the light (John 8:12) The code tells us that the third is the good seed. When we look to the third group of nine, that's to say from 19 till 27, the sum turns out to be 207, the number of light,

, 200+6+1=207. The word light is the 27th word of the bible in Gen.1:3. In this verse light is the 6th word and starts on the 21st letter (the triangle of 6=21) So the three letters of light have in the verse the letter places: 21, 22 en 23, sum 66. The bible that is also called the Word of God and has to bring light in our existence, contains 66 books. 66 is the triangular number of 11, which is the 6th prime. In this mathematical way the word light is pinpointed in the bible text. In the construction of the alphabet is already hidden that Jesus will bring the light.  This is a part of Creation.

In the end the Hebrew alphabet has 22 letters. In chapter 10 I have shown that the triangle of 22 has 235 units and that those units can become connected by means of 441 triangles (=truth). Jesus is called as well the WORD as the TRUTH. A reason to look an other time at the number 22. Because I found significance in the composition of composites in the story above, I started to count from the number 22. In the table beneath you can see how, starting with 22 it ends up with 386. Eight numbers are involved, six are counted (in three times) and the seventh (the result of those three times) points out the eighth:

The number 2368 is the CV of Jesus Christ. He is the King of Creation. That is what Gods Number Universe is telling us.